LPL Research reduced U.S. and global GDP forecasts due to Russian commodity disruptions, elevated inflation dynamics, and higher borrowing costs. Still, we expect the U.S. economy to grow 2.7-3.2% in 2022, supported by business investment and consumer services spending in the latter half of this year. Forecasts for GDP growth in developed economies excluding the U.S. and emerging markets were also reduced this month to 2.5–3% and 3.8–4.3% respectively, bringing the LPL Research global GDP growth forecast down about one percentage point to 3–3.5%.

This year, many aspects of the economy will likely be told as tales of two halves. Economic growth during the first half of this year will likely be different than the second half. Moreover, inflation pressures affect the lower half of the consumer base differently than the upper half. As the country adjusts to pandemic reshuffling and rising mortgage rates, we will likely observe greater regional and demographic divergence within the housing market.

Overall, the first half of this year will likely drag on 2022 U.S. economic growth while the second half of the year could rebound if global conditions improve. We started this year with a variant strain of COVID-19, and consumers and businesses alike pulled back spending. Before the economy could recover, geopolitical tensions snapped from Russia’s decision to invade Ukraine. Commodity prices rose to record levels, some markets temporarily closed, and fixed income markets responded to a new paradigm.

Globally-coordinated sanctions will impact markets for as long as Russia’s war remains. Because of geopolitical conflict and persistent inflation pressures, we revised our U.S. GDP forecast again in March after a downward revision in February. We now expect the U.S. to grow 2.7–3.2% in 2022, as noted in our latest Global Portfolio Strategy report. Last year, as the economy rebounded from the lockdowns, consumers concentrated spending on goods versus services, which translated into an outsized contribution to growth [Figure 1]. 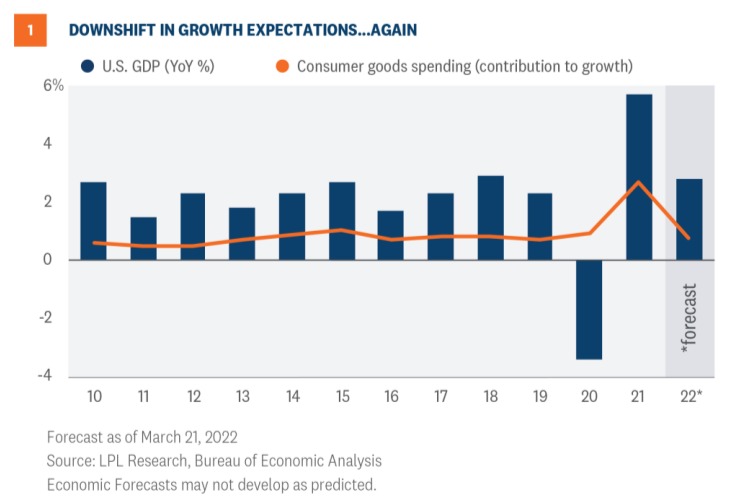 As consumers pivot to services spending, the 2022 growth estimate will have support from a rebound in services spending in addition to strong business investment. Consumers likely have pent up demand for services foregone since March 2020. If spending patterns revert to trends, the economy will have $500 billion added to the consumer services component of GDP [Figure 2]. The forecast is also predicated on wage growth from a tight labor market and households flush with cash. 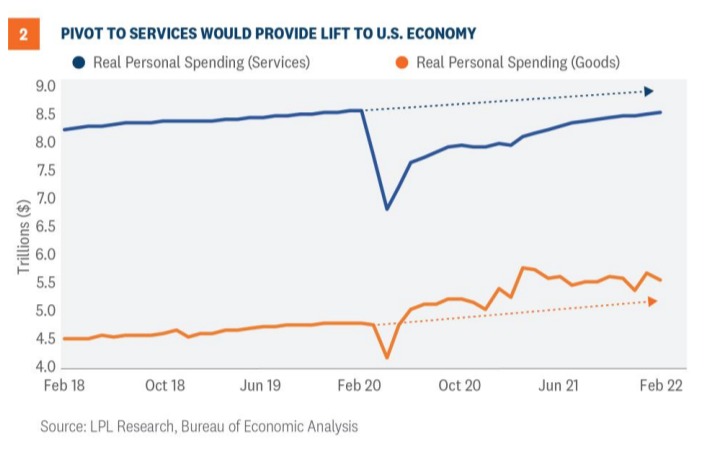 Recent consumer surveys point to weakness for the first half of this year but a rebound in the second half is still possible. Both Conference Board and University of Michigan surveys reveal a burden on consumers, particularly from pricing pressures. Surprisingly, buying plans within the next six months for big-ticket items such as cars and houses are at or above trend. The headline Consumer Confidence Index is lower than recent months, but a decline in consumer confidence does not always foreshadow an imminent recession [Figure 3]. The Index fell in the mid-1980s and throughout the 1990s, and recessions did not immediately follow. On the contrary, during the late 1980s, consumer confidence steadily rose after the low point in January 1987. Even though recession risks are rising, the LPL Research base case scenario is no recession in the U.S. this year, assuming the Federal Reserve (Fed) does not overtighten and supply constraints ease, to list just a few risks to growth. The weak survey in January and February is consistent with the overall narrative that first quarter GDP growth will be very low, but if inflation pressures subside and the labor market remains solid, GDP growth should recover in the latter half of the year. 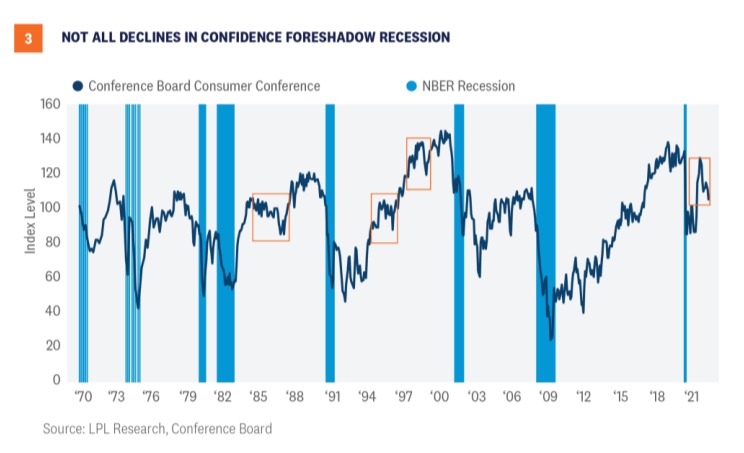 Core bonds (as measured by the Bloomberg Aggregate index) have had the worst start to the year since the 1980s due to a significant repricing of Fed rate hike expectations. At the end of September 2021, markets were expecting only one 25 basis point (0.25%) rate hike this year, but markets are now expecting the Fed to hike short-term interest rates by 250 basis points (2.50%). This has caused U.S. Treasury yields, across the curve, to move meaningfully higher this year. At 2.60% (as of 4/07/22), the 10-year Treasury yield has already increased by over 1.1% this year and by over 2% from the August 2020 low of 0.50%.

So that said, as inflationary pressures have broadened this year, and with the Fed likely forced to tighten monetary policy quicker than we originally expected, we now expect the 10-year Treasury yield to end the year between 2.25% and 2.50% with risks to the upside. As this is a yearend target, there is a high likelihood that yields could get as high as 2.75%-3.00% in the near term, depending on the path of inflation over the summer months. If inflationary pressures remain stubbornly high, forcing the Fed to follow through with rate hike expectations, yields could continue to climb marginally higher, which is consistent with history. However, if inflationary pressures fade over the course of the year, potentially resulting in a less aggressive rate hiking campaign, it’s likely that yields could move back down to around current levels, which is our expectation.

An additional consideration, though, is if the Fed is forced to hike rates more aggressively than markets are expecting, there is a possibility that recessionary risks are pulled forward into 2023, which could cause interest rates to move lower than current levels. Given the three potential scenarios, we think the biggest move higher in yields has likely already happened but we do think elevated levels of volatility are likely to remain.

Due to a confluence of factors, we expect slower economic growth in the U.S. and globally. Fully functioning supply chains, restored relationships in Eastern Europe, and improving inflation metrics are all key factors for our baseline forecast. Growth in the latter half of the year will likely come from business fixed investment and consumer services spending as both commodity markets and fixed income markets settle into the post-pandemic central bank tightening cycle.