If the U.S. economy enters a recession, the causes and potential outcome will be hotly debated. At LPL Research, our starting point is always looking at history. This week’s commentary will remind us of three things we know about historical recessions.

First, a recession has an important technical definition that’s different than what many people think. Earlier this year when Gross Domestic Product (GDP) growth was negative, many were under the false impression that two consecutive quarters of negative GDP make a recession. Often that view is a good general approximation but not the technical definition. The National Bureau of Economic Research (NBER) is the official arbiter of U.S. business cycles, and they consider a wide range of economic indicators other than just the quarterly GDP metric. The official definition of a recession is “a significant decline in economic activity that is spread across the economy and that lasts more than a few months.” 1 Now for most investors, this definition does not sound very specific and raises questions about things like the meaning of “significant.”

The three factors for defining a recession are depth, diffusion, and duration – conveniently referred to as the “three D’s.” Depth refers to declining economic activity that is more than a relatively small change. Diffusion describes an economy that has experienced a contraction in a wide range of sectors, such as trade, business activity, and consumer spending. Duration is likely the least important of the three D’s and measures the time between the previous business cycle peak and the following trough. Given the unique cause of the 2020 recession, the time between peak and trough was the shortest on record – only two months.

Second, warning signals usually precede a recession, and these signals are clearly set forth by NBER. The relevant data for determining the onset of a recession is conveniently categorized at the St. Louis Federal Reserve. 2

One reason we see healthy debate on the likelihood of recession is that for most of this year, not all metrics were flashing warning signs. However, recent data may give us more clarity. On October 20, the Conference Board released the Leading Economic Index (LEI) and as of September, the LEI had declined seven out of the last nine months, showing that the economy could enter a period of significant and broad-based contraction. The decline is predictable as many sectors, such as housing, started slowing months ago. Since the inception of the index, a decline of this magnitude over a six-month period has always foreshadowed a recession in subsequent quarters [Figure 1]. As such, we think recession risks appear more probable by the beginning of next year. If the economy does fall into a recession, the cause will likely be from the consumer sector retrenching after years of inflationary pressures, high housing costs, and slow real wage growth. 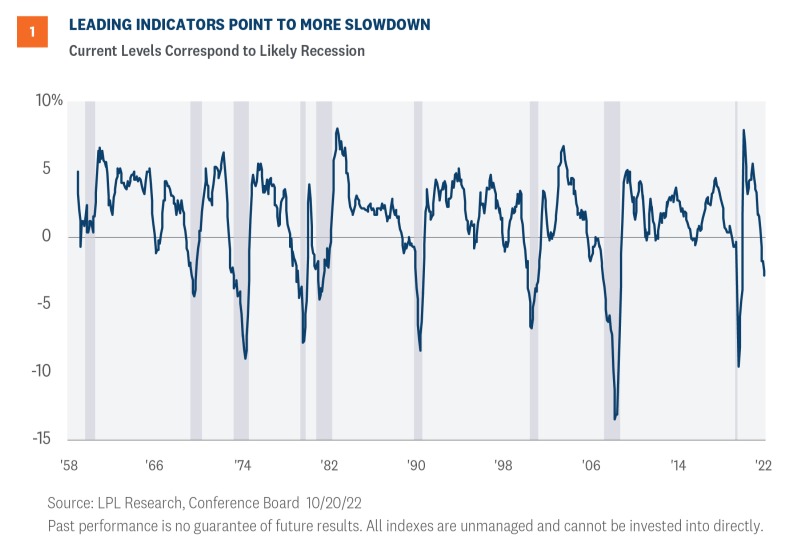 Third and most importantly, recessions historically have not perfectly coincided with market declines. Bear markets, defined by a market decline of at least 20%, and recessions overlap but investors should remind themselves that markets are forward-looking, so current market volatility is often about future recession risk. As predictable as this slowdown is, the markets have likely priced in much of the slowdown but that remains to be seen. Taking a broader look at the markets than just officially designated recessions, in Figure 2, we show the following 12- month equity returns after a negative shock. History may not repeat itself but it often rhymes, so during these contentious times investors should remind themselves of the three things to know about recession. 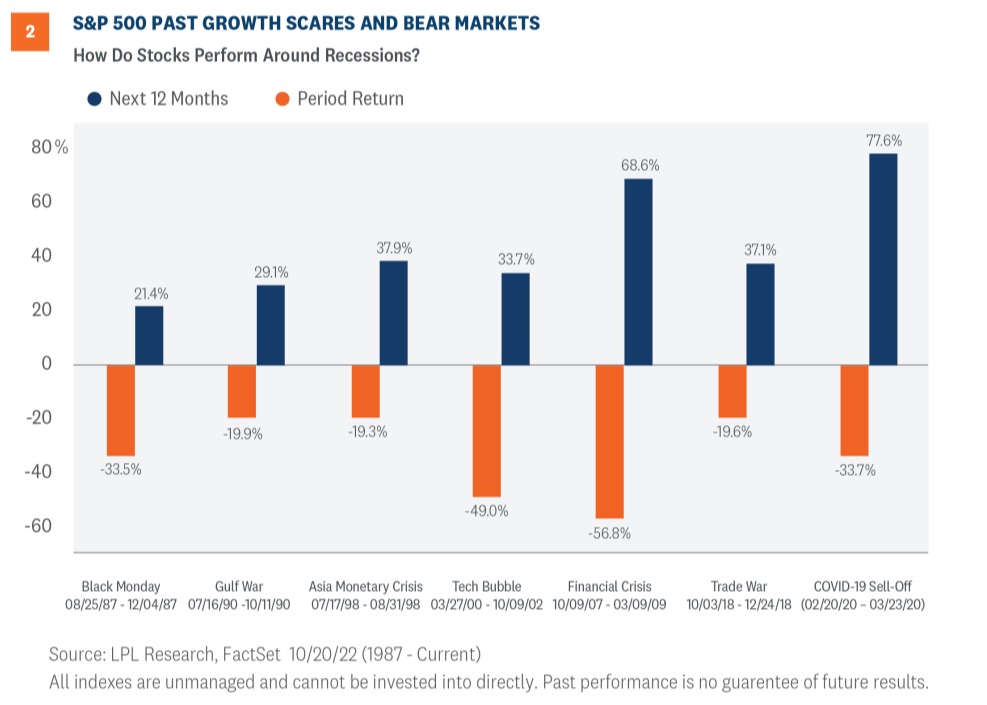 Even though investors are tempted to say “this time is different,” we all can take note of general principles about business cycles and the markets. The Federal Reserve (Fed) has warned that the current inflation fight will be painful, so a dip into recession should not be that surprising. As more metrics start blinking red, sticking to long-term investing plans with the guidance from a financial professional is becoming more and more important.


This material is for general information only and is not intended to provide specific advice or recommendations for any individual. There is no assurance that the views or strategies discussed are suitable for all investors or will yield positive outcomes. Investing involves risks including possible loss of principal. Any economic forecasts set forth may not develop as predicted and are subject to change.

References to markets, asset classes, and sectors are generally regarding the corresponding market index. Indexes are unmanaged statistical composites and cannot be invested into directly. Index performance is not indicative of the performance of any investment and do not reflect fees, expenses, or sales charges. All performance referenced is historical and is no guarantee of future results.